History of Our Lady of the Snows

For information on the National Shrine, the Basilica in Rome, and the origins of  Our Lady of the Snows please use the following links:

HISTORY OF OUR LADY OF THE SNOWS PARISH

Our Lady of the Snows Parish, Floral Park has a rich history of faith extending back to 1948 when Father William F. Murray offered the first Mass in an open field which was part of acquired property for a new parish. The Mass took place on October 3rd, and the altar was loaned by the neighboring parish of Saint Gregory the Great in Bellerose. Having been appointed by Bishop Thomas E. Molloy to establish the parish, Father Murray promised: “Together we shall build a new spiritual community. Together we shall face our future with hope.”

In those early days of new hope, the parish Mass was celebrated on Sundays in the rear of a candy store located at 79-07 248th Street, while weekday Mass took place in an apartment at 255-35 75th Avenue that was donated by Mr. George Gross of Glen Oaks Apartments. Mr. Gross and Mr. Ben Wanger, the owner of the candy store, were of the Jewish Faith. From its beginning Our Lady for the Snows Parish thrived because of the generous cooperation of many people, Catholic and non-Catholic.

At the start, the open field was occupied with a chapel which was a pre-fabricated building purchased from the War Assets Administration. The chapel was completed on August 5, 1949, the Feast of Our Lady of the Snows. Eventually, religious instruction was offered for fifty children, and on January 27, 1949, three Sisters of St. Joseph arrived to help start a school. The parish grew rapidly, and soon a larger church and a school were needed. In 1952, ground was broken for a school auditorium that would serve as a church until a permanent structure could be built. The first Mass was celebrated there on May 3, 1953. 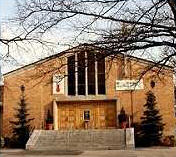 The Sisters of St. Joseph continued religious instruction for children, and Sister Joseph Anna became the first Superior of a new convent which opened in September 1954. Over time, construction of a school began, but the school building was not ready for occupancy when the school opened in September 1959. Classes were held in the church-auditorium as well as in the chapel, and Sister Catherine Eugene, CSJ, was the first principal of Our Lady of the Snows School. Seven years later, an addition was added onto the school with a new convent atop the building.

Besides the physical expansion of the parish and growth in religious instruction, the faith community grew in many substantial ways over the next years, particularly with parish societies, organizations, and annual events. The reforms from Vatican II enabled the parish to explore and implement new spiritual and liturgical ideas and develop new ministries, including ecumenism, outreach, a parish newspaper, Home School Association, and so much more. In the 1970�s, renovations were done to the church, and Bishop Francis Mugavero offered a Mass of Dedication on October 15th, 1979.

In the following years, both the parish and community saw the influx of new immigrants and the opportunity to welcome new parishioners of Indian, Filipino, and other backgrounds, enabling the doors of evangelization to open and bring an increase in parish membership.

The growth of the parish led to a wise decision in May 2001 to consider building a new and larger church to accommodate all the faithful who called Our Lady of the Snows their spiritual home. Over the course of the next several years, with groundbreaking in April 2007 and laying of the foundation stone on March 15, 2008, the tireless efforts of parish volunteers and the contributions of generous parishioners, benefactors, and friends allowed the vision of a new church become a reality.

Excitement and gratitude filled the air as the new church opened in June 2008 and worshippers entered a sacred space that was beautifully-crafted and spiritually enriching. Only favor and admiration could be expressed by numerous parishioners, neighbors, and the curious. A Dedication Mass was celebrated on August 5, 2008, by Bishop Nicholas DiMarzio.

It must be noted that each and every element of Our Lady of the Snows parish life and its liturgy was taken into consideration when building the church, and this care is made evident in the large sanctuary space, preservation of the crucifix and a Blessed Mother statue from the former church, the acquisition of the stained glass windows from the Chapel of Our Lady of the Skies that once stood at John F. Kennedy International Airport, and so much more.

As Our Lady of the Snows Parish continues to grow in many significant and wonderful ways, it is the hope that all worshippers and visitors to our parish open their hearts each day to the will of God. Through the intercession of Mary, Our Lady of the Snows, may we strive to imitate her Son Jesus in our charity, sacrifice, and prayer.

Pastors of Our Lady of the Snows

*ordained Auxiliary Bishop of Brooklyn in 2012